I woke up almost noon today since I refused to sleep last night. Stayed at home the whole afternoon playing Uncle Aot's Xbox "Assassin's Creed II". Daddy wanted to have some north eastern thai food but instead we drove to Carrefour for dinner. First I wanted to have Japanese, Fuji, but the queue was so long we decided to have dinner in the food court instead.

After Carrefour we went to Aunty Kwan restaurant for some food before going home. I will be leaving Hat Yai tomorrow back home and will not be returning until Uncle Charles Wedding in Koh Samui later in February. We have been booked at Shasa Hotel in Koh Samui @ Laem Sett, Koh Samui. 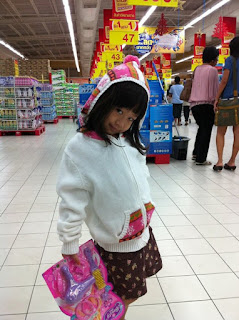 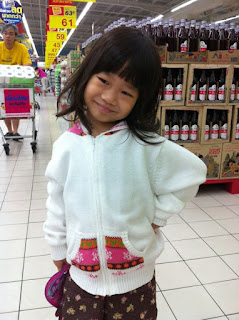 An article in Malaysia's 'The Star' on "No Plastic Bags On Saturday" which daddy totally disagree, plastic bags are not suppose to be charge an additional of RM0.20 since it is a duty of the retail outlet to provide a bag to the customer to hold the purchases. Daddy bought me a present for Christmas at Toy's R Us on Saturday and daddy had to pay an additional of RM0.20 for the bag, there was no way we could find a bag large enough to fit the box that daddy bought! So how do they expect the consumer to bring the purchase bag? Why can't the retails supply bio-degradeble bags instead!, which could be use as garbage bags!

I am currently in Thailand, and the country is also in the midst of trying to change the perception of providing plastic bags to the consumer but anyway we had a whole lots of bags from Carrefour today!
Posted by Aeryn Chow at Sunday, January 02, 2011