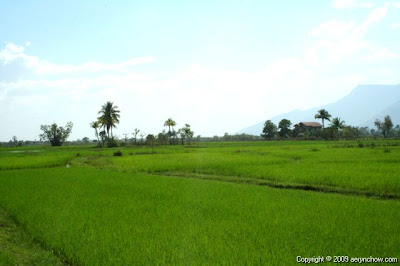 This road trip is turning into a Khmer ruins road trip, starting with Prasat Phanom Rung in Buriram, then accidentally daddy drove passed another ruin, supposedly the oldest in Thailand, Prasat Phompun, and today we are heading to Vat Phou in Champasak province, an UNESCO World Heritage site.

It was a crazy morning when daddy started asking around to rent a van since the tuk-tuk driver yesterday told us it was THB1200 for a return trip includes petrol, toll and ferry but this morning when we called him, the price has shot up to THB1800 which is ridiculous not including the transfer to Chong Mek border. Daddy manage to get a van from the hotel for THB1500 per day use excluding petrol (petrol - THB300).

The journey to the entrance of the temple took about an hour with about 30mins getting across the Mekong river, and driving pass a few villages along the way with unique guesthouses and colonial bungalows as well. This would have been a nice place to relax for a couple of nights. 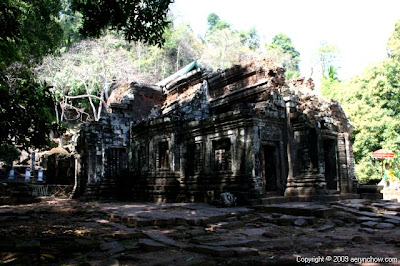 We arrived at the complex just before 1100hrs after sorting out the tickets and parking area. This original temple was built as early as 5th century but the current temple was build between the 11th and 13th centuries. The walkway to the temple are still very much intact, with some restoration work being done at the south palace. The temple is about 100m from the ground and part of the stairways are not in good condition so daddy decided to go up on his own since it would be dangerous to carry me on the back. Click here for more information about this temple.

We had lunch at a nameless restaurant, across from the Champasak Governor Office, just before we head back to the Thai border taking the new road. The food wasn't very good and the price was expensive as well. There are some guesthouse with restaurant overlooking the Mekong River as well, which might be better.

Since our driver suggested us to take the new road back to the Thai border and it look good when we passed it yesterday, it turn out to be a off-road ride, with temporary bridges, large holes and fill with dust. It was an interesting ride since it passes some villages and also a temple up in a hill. I was already sleeping by then. It was like sleeping in a bouncing bed. Anyway we got to the Laos Immigration just before 1600hrs, so we don't have to pay for the overtime charges. The border crossing was easy and smooth. We were in Laos for exactly 24hours.
After collecting the car, it was getting dark and daddy wanted to put up a night in Nakhon Ratchasima since it is only a couple of hours drive back to Bangkok. We took a detour to visit the bi-colour river at Khong Chiam but it was dissapointing since it was nothing much but an interesting place to relax as well, with nice guesthouses and some restaurant overlooking the Mekong River.

Daddy drove to Nakhon Ratchasima to sleep since daddy thought of visiting another Khmer temple 60km north of the city. It was a long drive, we arrived in Nakhon Ratchasima (Khorat) at 2200hrs, it took almost 6 hours with a dinner break at PTT.