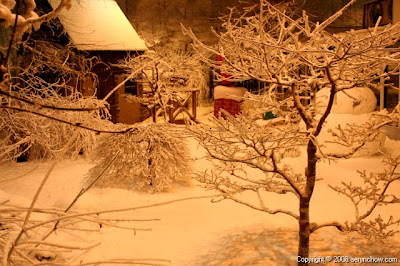 When I woke up this morning, I asked daddy to go 'shopping' but instead, daddy remembered to bring me to the four season house at Bukit Cerakah. We arrived at the park around 1400hrs and it was already full of people, but daddy was lucky to find a parking just outside the main gate to the park entrance.
We waited for about 15mins before we manage to get into a bus, that was even when daddy got feddup lining up and thought of walking to the four season house since the queue was very very long and it would take at least 3 buses before it was our turn to get on. Just as we started our walk, bus after bus arrived and one of the bus stopped right next to us and daddy asked if we could get on since we were already not in-line, driver said 'it' okay' since the bus was actually going another direction. But later it reverse and went back to carry more passenger and eventually went to the direction. Lucky Lucky.
The temperature in the four season house this trip was between -2 to -7 degrees celsius, but it wasn't freezing cold since there was no wind inside the house, which was good since most of us are not dress up for it. Anyway it was still good since it is the closes thing we have to snow, so I could say I had a "White Christmas" this year!
Daddy wanted to walk back to the main entrance since we did not have the chance to visit the rabbit farm (don't waste your going there), bird cages (only had a few peacock) and animal park (nothing much, only a few deers, some horses, ostrich, buffalo, ducks and a few birds). We took a bus back to the main entrance after that since there was already a bus when we came out from the animal park. Entrance to the park is RM3.00 for adults and another RM3.00 for adults to enter the 4 Season house. We left for home immediately after that since we were suppose to attend a christmas dinner at Tai Ku Poh house at 1900hrs.
We arrived at Tai Ku Poh apartment just after 1900hrs and I had my first bite of roast turkey. A great christmas dinner and got my first christmas present too, a new worm-worm.
Lunch : Fried Egg Pumpkin and Pork with Steam Brown Rice
Dinner : Fried Egg Pumpkin and Pork with Steam Brown Rice