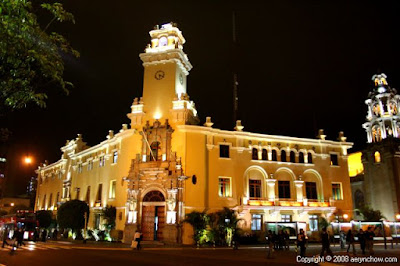 I think I am still stuck to my Malaysian Time routine as I woke up at 0630hrs this morning while daddy just slept around 0300hrs and the worst was I refused to let either mommy or daddy to continue sleeping. Initially we were suppose to meet up with Uncle Calvin and Anuty Irene at 1000hrs but instead, mommy started knocking their door at 0830hrs! It was lucky that mommy and daddy had their breakfast earlier we manage to join a city tour to Pachacamac which start at 1000hrs.
The tour to Pachacamac took 3 hours, starting off with Miraflores City Hall on Mirabus open-top bus. The bus took a drive to Huaca Pucllana and then via Diagonal to get onto Circuitos de Playas Highway (Pacific Ocean Coastal Highway). Pachacamac "literally translated to he who created land and time" Temple has been a ceremonial centre for about 1000years before the expansion of the Inca Empire. Daddy wanted to very much to view the excavated and reconstructed Palacio de Las Mamacunas (House of the Choosen Woman) but unfortunately this guided tour only stopped to explore the ruins Templo del Sol (The Sun Temple). Since I slept as soon as I got onto the bus, only waking up after the Templo del Sol tour, I stayed in the bus having my milk while waiting for daddy to come back. The tour ended at exactly 1300hrs and daddy would highly recommend this trip. Bring along a wind breaker if you are going to seat on top during winter! and becareful of the tree branches as well.
Daddy wanted to walk to Huaca Pucllana but because Uncle Calvin needed to change the room, so instead, we went on the hostal shopping! hopefully tomorrow we will be able to cover both Huaca and Central Lima before heading back for some shopping at Larcomar. So instead, after checking into the new room at Hostal Schell, mommy took me to Bata along Larco Ave and got me a new leather boot on then we walk over to the Mercado del Indios (Indian Market) for some souvenir shopping.
Lunch : Oats
Dinner : Cereals