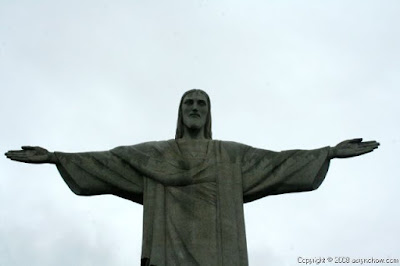 Since we did not manage to visit it yesterday daddy said we will have to visit it today as we will be leaving tomorrow and this will be the last full day we will be spending in Rio de Janeiro. Today, the weather isn't very good either or it hasn't been good at all since we arrived. We left around 1000hrs this morning hoping that the sky would be good but it was worst than yesterday. It was so cloudy that we could not even see the sugarloaf at all and only part of Copacabana.

The drive up was easy and daddy used a different route since daddy did not want to drive through the city as the traffic out was quite bad leading to the tunnel. When we got to the foot of the Corcovado, there were some guys try to stop daddy from driving up but luckily we drove up a day earlier and knew it was possible to drive all the way to the ticketing counter. There was no problem driving up except there has been a landslide a couple hours ago but it was cleared by the time we were driving up.

The entrance was only 14 reals which the entrance and transportation up to the main entrance or you can pay 30 reals by train, which take a longer time but supposingly more scenic. We opted for the van and in a few minute I was up looking up at the second wonder of the world, Christ the Redeemer, build in the 1930s. This statue stand at 130ft atop a 2300ft Mount Corcovado. In 2007, Christ The Redeemer was voted as one of the New Seven Wonders of the World.

We did not stay too long here since it was too cloudy and daddy thought it would be nice to take a drive to the city instread, and visit Carioca Aqueduct, which was build in the 18th century, bringing in fresh water from the Carioca River to the city population. Now it longer served as an aqueduct but a tram bridge connecting the Lapa and Santa Theresa neighbourhood.

We walk around centro but daddy was afraid to take photos since he did not feel safe carrying the camera openly.

Later in the afternoon, daddy thought to drive to South America's largest malls, Barra Shopping, but it was a total dissapointment, it wasn't as big how its being advertise. There were nothing much to buy and a total waste of time. The restaurant isn't that interesting either, I would suggest Rio Sul anytime for mall shopping in Rio de Janeiro.
As we were driving back to the apartment, daddy saw the Hard Rock Cafe and could not resist stopping over to check it out. Mommy wasn't so keen since I was already sleeping but daddy insist to have a look since we are already here. 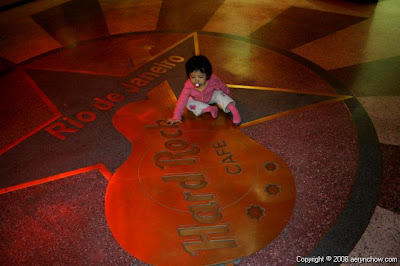 Since daddy did not manage to get any souvenirs from Rio and it would be our last night in Brasil, daddy was determine to get a few souvenirs from friends so we drove to the night street market along the Copacabana beach.