Seven Wonders Of The World 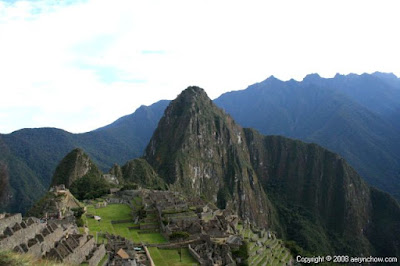 Finally daddy arrived at his main highlight of this trip, Machu Picchu which was voted as one of the New Wonders of the World on July 7, 2007.
We woke up around 0530hrs and hopefully we could catch one of the earliest busses up to the main gate of the ruins. But as usual, we only manage to leave the hotel around 0700hrs and arrive at the main gate just before 0730hrs. The ride up okay but it would have been better if the road were tarred. The entrance to this park isn't very impressive, only an office with a small booth to check the entrance passes.
I was greeted to the beautiful scenery and obviously the ruins. There are a few walk to take but daddy took the long circuit, which took us nearly 4 hours to finish which include me having my breakfast there. There has been 2 theories about the contruction of this complex, one is being a the control centre during the heights of the Inca Empire and another would be a settlement to house serious criminal offender. It started off with steep climb into the Hut of The Caretaker of the Funenary Rock to see the famous view of Machu Picchu.
Daddy took the following route,
1) Hut of The Caretake of the Funenary Rock
2) Royal Palace
3) House of the High Priest
4) Sacred Plaza
5) Temple of Three Windows
6) Principle Temple
7) Sacristy
8) Intihuatana
9) The Three Doorway
10) Residential Sector
11) Industrial Sector
12) The Mortars
13) The Prison Group
14) Temple of Condor
Daddy initially wanted to try climbing the Huayna Picchu (Wayna Picchu) but the queue was too long and it was lucky that daddy did not climb since it rained immediately we arrived back in Aguas Calientes. The climbed would have taken 1 hour up and 1 hour down.
We arrived back at Agua Calientes at about 1200hrs and went immediately for lunch and we were stuck there for hours since it rained and did not stopped until we board out train bound for Cusco. Initially daddy thought it would be good idea to have a dip at the hot spring but it rained so we stayed around the hostal until the train departure time at 1703hrs.
The train ride back to Cusco wasn't as good as the ride from Ollay since it was full and the seats were unable to recline as well. I was crying all the time until daddy had to give me his seat so I could sleep better. The journey took very much longer than expected, maybe because everyone were tired. We did not finish the journey to Cusco as we got off in Poroy as the is a bus that cost NPS4 per person and only took 10mins from the train station to Cusco, at Plaza Regocijo.
An exciting but extremely tired day!
Lunch : Cereal
Dinner : Milk

Click here for more photos in slideshow. (more than 200 photos)

Congrats, you made it and had good weather also!!!
Enjoy the rest of the trip...
Luis

Hey thank Luis, I am now in La Paz leaving to Rio via Buenos Aires tomorrow morning. MP was great but really tiring. Hope to see you one day in Asia....
Loen