A Long Journey Back 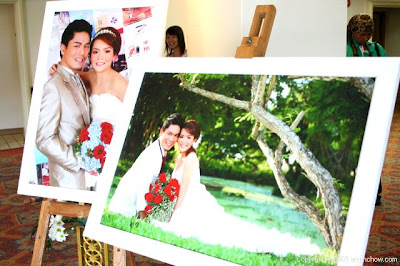 I was suppose to attend two weddings today but because my flight back from Kota Bharu to Kuala Lumpur was delayed for about an hour, I had to missed Uncle Shen wedding dinner in Kajang. Anyway it was an interesting day for me even I woke up much later today with daddy

Today started very early in the morning when mommy had to help Aunty Por family guard the entrance before Uncle Art could reach Aunty Por, which was "profitable" since Uncle Art bestmen had to pay of 4 blocks before getting to Aunty Por. By the time me and daddy woke up around 0900hrs all excitement has been moved to the main hall for newly wed prayers. After me and daddy finished the breakfast, we proceeded to the main hall to see what is happening but unfortunately it was all over and everyone was leaving to get ready for the luncheon at 1200hrs.
After breakfast, daddy walked around the town trying to find some local Thai malay pop songs but most of the shops were closed while me and mommy went to see Aunty Por at her room before mommy going back to the room to dress-up. Daddy got back around 1100hrs without any luck on the CDs. I went for lunch earlier with Mommy while daddy only joined us around noon for lunch, which the food was being served right on time!

We left the hotel back to the border around 1425hrs to catch our flight on Malaysia Airlines at 1950hrs (MST) since no one really knows how long does it takes to get to the airport from Pengkalan Kubor. The ride back to the border was smooth, except for a few police and army checkpoints along the way to Tak Bai Immigration Complex. We passed both immigration within 15mins with a few minutes on the ferry and the walking time taken from the immigration booth to the ferry jetty under the rain!

The taxi ride from Pengkalan Kubor to Kota Bharu Airport took about an hour for RM50.00 (daddy thought it was cheaper since mommy was being told it could not be more than RM20.00) per taxi passing through Kota Bharu. We arrived at the airport just before 1800hrs and had our dinner at KFC since the check-in counter wasn't even open. After daddy checked-in the flight was rescheduled for 2030hrs instead of 1950hrs, a 40mins delay. So there is no way I am going to make it for Uncle Shen wedding dinner.

Then there was a slight delay again and the plane only took off around 2050hrs and by the time we got out of the airport it was already 2215hrs. After so many times of flying, this time I could tell mommy and daddy that my ear hurt because of the different pressure and it wasn't during take off or landing but during mid-air flight. I cried and kept telling mommy and daddy that the ear was painful since I refused to drink any water until daddy told me that after drinking water, the pain will go away.

I got back home around 2300hrs after taking the KLIA Transit and grandpa come to pick us up at Putrajaya ERL station.

(on today's Woody's Talk Show, his host Krit Confirm (a fortune teller) say Brat Pitt and Angelina Jolie will divorce in 2 years and 7 months, with Arnold Schwarzenegger being the next US president a president after Obama, Obama will not be able to continue his second term as president, Krit Confirm says he himself die before he reaches 30years old and Thailand will be peaceful for the next 2 years. Do you believe him?)
Posted by Aeryn Chow at Sunday, August 02, 2009