After much hesitation, mommy today decided to feed me some stage one cereal today. It was actually given by Dr. Khoo on my last visits but people has been telling mommy that it would be better to feed me when I turn 6 months old instead of now but daddy has been asking why not try since doctor has already given us some to try. Grandpa took some video of me eating and I surely enjoyed it.

Then today mommy also realise when I started to react to calls because I would move towards mommy when she claps her hands and ask me if I want to be carried or not. It could work with daddy as well. Then later in the evening, daddy and mommy finally knew what was the cause of my fall of the bed in Kanchanaburi the other day because it happen just now. I was lying on my bad and suddenly, within seconds, I had roled over and onto the floor away from the mattress. Mommy was quite sure this was what actually happen there other day.

But in the evening, daddy friend, Uncle Lorenz, called to inform him that his wife, Auntie Nydia Wong (Wong Ching Yee)has just passed away on Sept 18th, 2007 in Germany due to cancer. It was definately a shocking news to hear since daddy knew that they had their delayed marriage ceremony in Kuala Lumpur in August 2007. May Auntie Nydia rest in peace.

Below is a photo taken during one of daddy's diving trip out with Auntie Nydia and Uncle Lorenz, (from left to right - Auntie Nydia, Uncle Lorenz, Eddie Faber, Uncle Jerry Knight, Uncle Eddie Zul and Daddy taken in Dec 2001 at Phi Phi Island, Thailand) 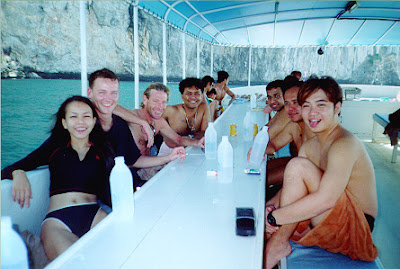 A video taken by grandpa while mommy feeding cereal to me,